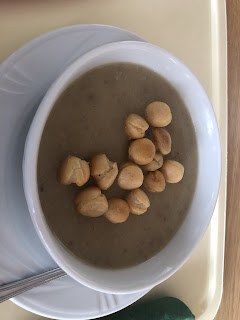 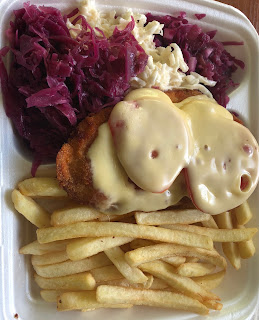 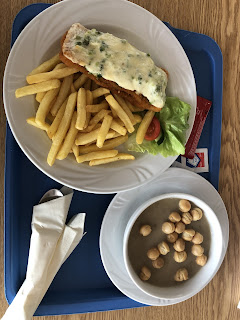 A meatball is ground meat rolled into a small ball, sometimes along with other ingredients, such as bread crumbs, minced onion, eggs, butter, and seasoning.

Heat oil in a heavy bottomed vessel. Add curry leaves and chopped onions and saute for 4 minutes on low to medium flame.

Once the onions turn transparent, add the ginger garlic paste and saute for 3 minutes.  Add red chili powder, coriander powder, cumin powder and turmeric powder.  Add tomato puree and cook on low to medium flame for 7 mts or till the oil separates.
Add salt to taste and garam masala powder and mix. Add 1 1/2 cups of water and bring to a boil. Allow to simmer for 6-7 minutes. Add the potatoes.  Drop the minced meat balls carefully, one at a time, into the gravy and allow to cook on medium flame for 5 minutes. Lower the flame, place lid and cook for 20 minutes.  Add coconut milk and cook further 5 minutes and turn off heat. Garnish with chopped coriander leaves. 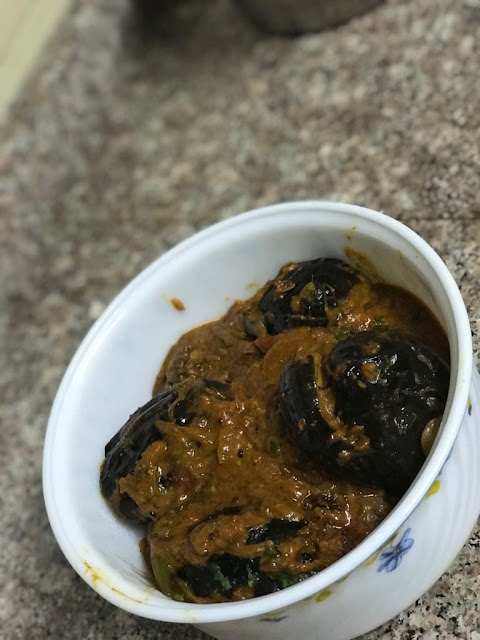 Gutti vankaya is a delicious South Indian recipe consisting of eggplants, stuffed with a flavorful paste. If you would like to try an ethnic dish, packed with flavor, try Gutti Vankaya for dinner tonight !

The cuisines of Andhra are the spiciest in all of India. Generous use of Chili and Tamarind make the dishes tangy and hot. The majority of a diverse variety of dishes are vegetable- or lentil-based. 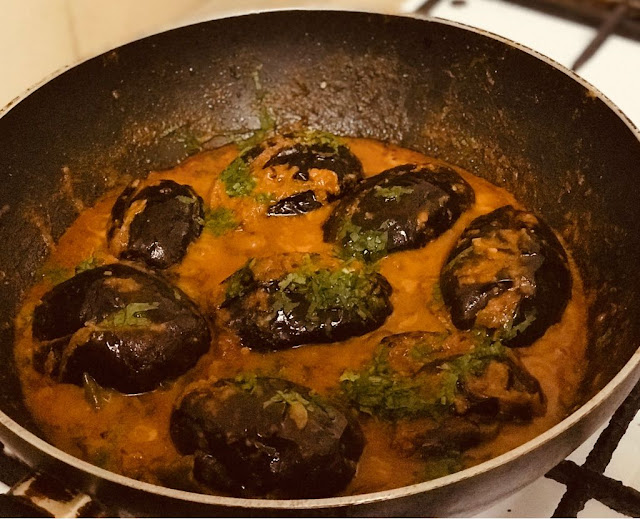 Roast and grind to fine powder

Roast ingredients under “roast and grind” – till you get a nice aroma. Cool and grind to fine powder. If adding chilly powder do not roast this, just add whilst grinding.   Add salt and tamarind paste or lemon to the mixture.

Remove the brinjals from water and stuff with this stuffing.

Heat oil, add curry leaves, jeera and mustard, add onions and fry till brown, add green chillies, ginger-garlic paste and fry.  Once the rawness disappears, add the tomatoes, salt and cover and cook till tomatoes are mushy. Add turmeric and fry for 2-3 minutes.

Add the stuffed brinjals and let is fry 2-3 minutes (don’t burn it).  Pour 1 cup water or just enough to make a gravy.  Cover and cook on medium heat.

Once they are fully cooked and tender add coriander leaves, adjust salt. 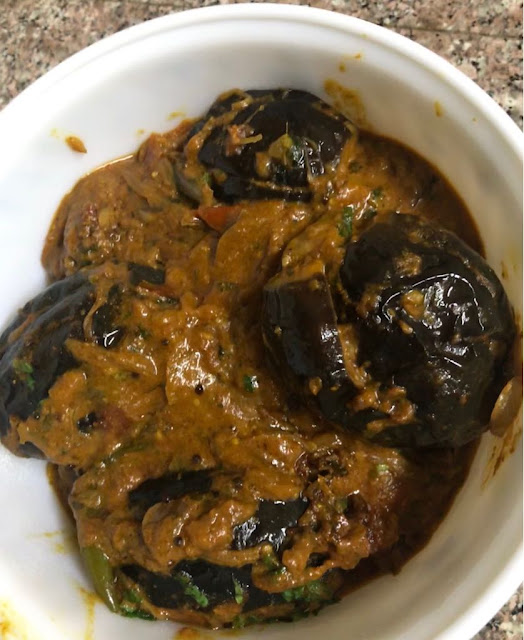 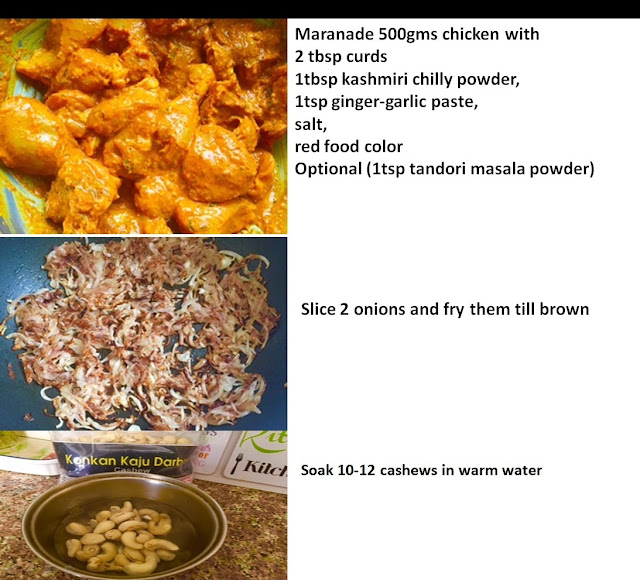 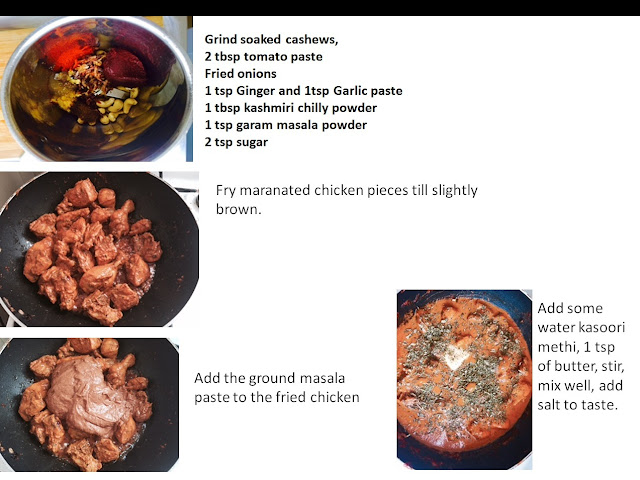 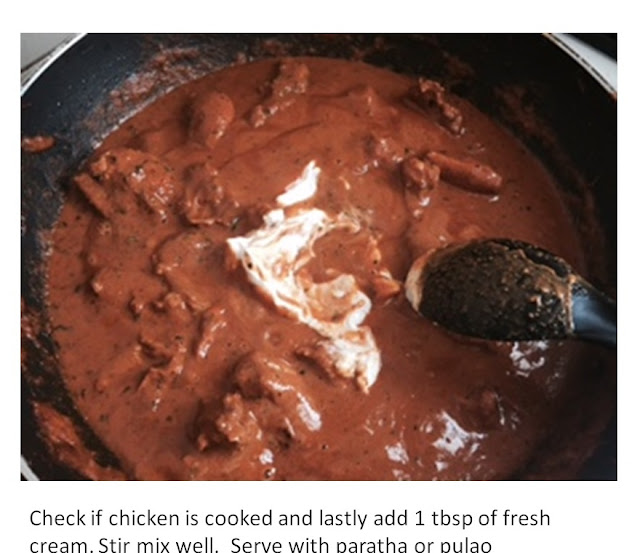 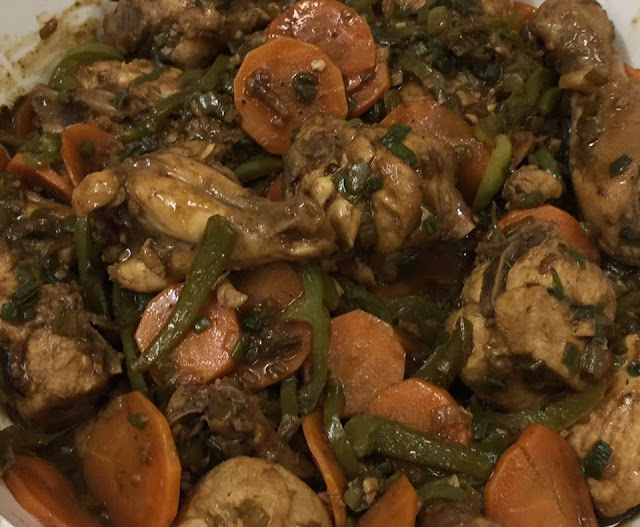 Chilli chicken is a popular Indo-Chinese dish of chicken. In India, this may include a variety of dry chicken preparations. Though mainly boneless chicken is used in this dish, some people also recommend to use boned chicken too – which I have used in my recipe.

The below is a simple easy way of making Chilly chicken, yummy in taste, my children just love this dish.  This recipe is given to me by my mom who is an amazing cook. 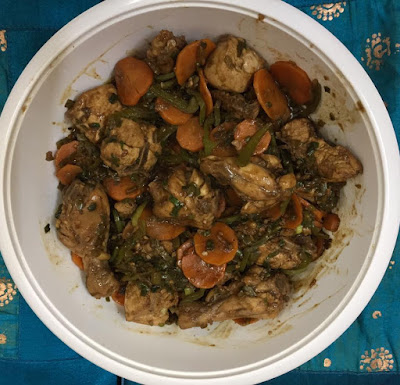 1.   Cut the chicken into medium/small pieces .
2.   Marinade chicken in ingredients under marinade for about 10-15 minutes.
3.  Heat oil, fry the capsicum slightly (do not overcook) and keep aside.  In the same pan fry the carrots, not fully and keep aside.
4.   Heat more oil in the pan, add spring onion(white) green chillies, ginger, garlic and add the marinated chicken pieces to this, add some more soya sauce and green chilly sauce. Cook chicken till done.  Once chicken is done add the fried capsicum/carrots – mix well. Garnish with spring onion greens.  Toss to mix.

Cutlet (derived from côtelette, côte, "rib") refers to  a thin slice of meat from the leg or ribs of veal, pork, or mutton (also known in various languages as a cotoletta, Kotelett, kotlet or kotleta)
a fried breaded cutlet.

Fish cutlet is a  kind of fish cut where the fish is sliced perpendicular to the spine, rather than parallel (as with fillets); often synonymous with steak.

In Indian cuisine, a cutlet specifically refers to cooked meat (mutton, beef, fish or chicken) stuffing that is fried with a batter/covering. The meat itself is cooked with spices - onion, cardamom, cloves, cinnamon, coriander (cilantro), green chillies, lemon and salt. This is then dipped in an egg mix and then in breadcrumbs and fried in ghee or vegetable oil. 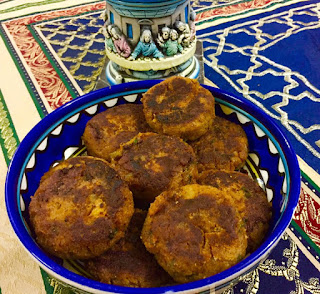 Separate the tuna from the water or oil ( I used canned Tuna in water) in the can and set aside.

Heat the oil in a pan and then fry the onions till slightly golden.

Add salt after tasting as sometimes the tuna has salt. Turn of the gas.

Allow the mixture to cool slightly.

Dip each one in some beaten egg then in breadcrumbs. Shallow fry on both sides until golden and crispy. 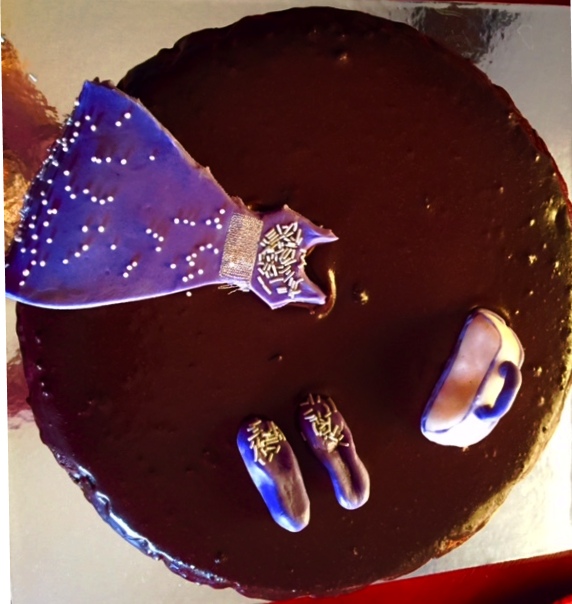 On 6th of January 2017 my daughter turned 16 and I baked this simple chocolate cake topped with Ganache for her.
Posted by Sharmila Fernandes No comments: 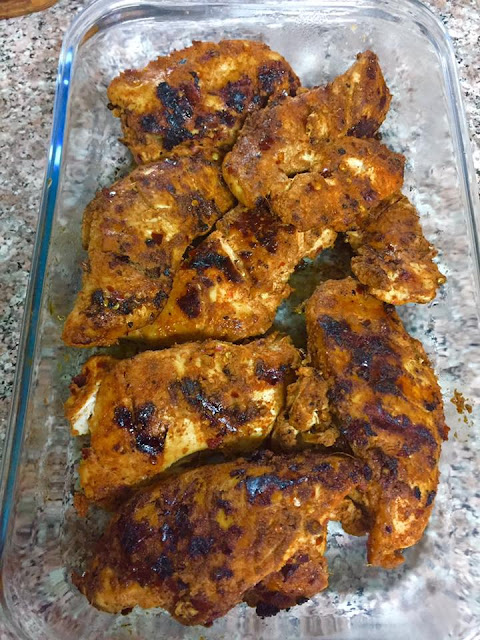 Mix all the ingredients given for marination together. Coat the chicken in this marination.  Heat a grill pan on medium high heat.

Now put the chicken in the hot pan, leave on one side for 5 mins, this helps the chicken to get the lines of the grill pan and get a char grill look. Flip the chicken and cook on the other side for additional 5 minutes.  Flip again cooking for a few more minutes till chicken is done.  Remove chicken from grill pan and let it rest.  Serve on a bed of lettuce. 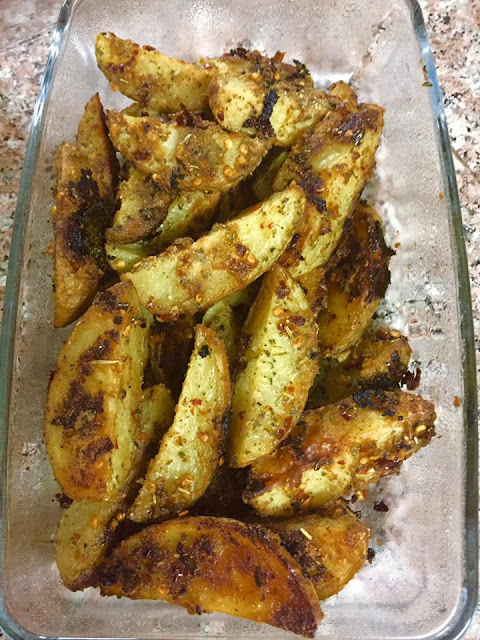 They make a great side for meatloaf, chicken or any kind of roast.

Peel and cut the potatoes in half lengthwise then lay each half flat and slice lengthwise into ½-inch wide half moons.

Place the potatoes in a big mixing bowl and toss with 2 tablespoons of oil.

Toss with the seasoning, garlic, 1 teaspoon salt, ½ teaspoon black pepper and half the Parmesan (plus a few pinches of red pepper flakes if you like).

Pour into the casserole dish and scoop out any spices or garlic left in the bowl.

Bake 30 minutes then remove from the oven and toss well. Sprinkle the remaining Parmesan on top and drizzle with the remaining oil.

Bake 25 more minutes. Toss well and season to taste with more salt and pepper if needed.

Place them in a serving dish and pour any remaining oil at the bottom of the pan over them and garnish with a little fresh parsley. 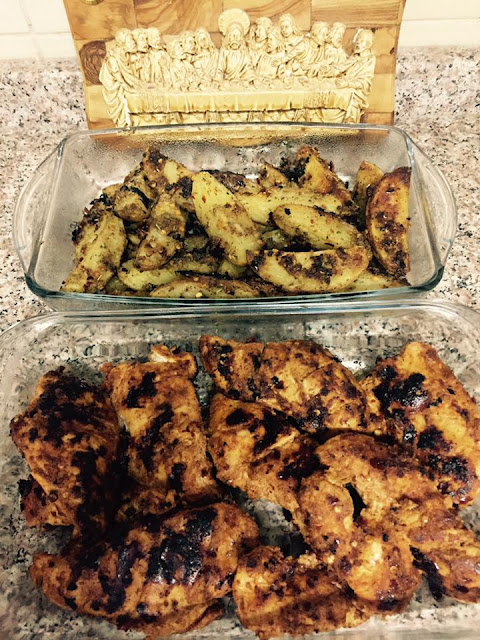 Email ThisBlogThis!Share to TwitterShare to FacebookShare to Pinterest
Labels: Starters 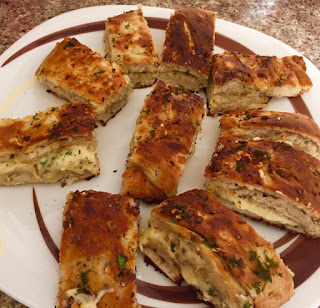 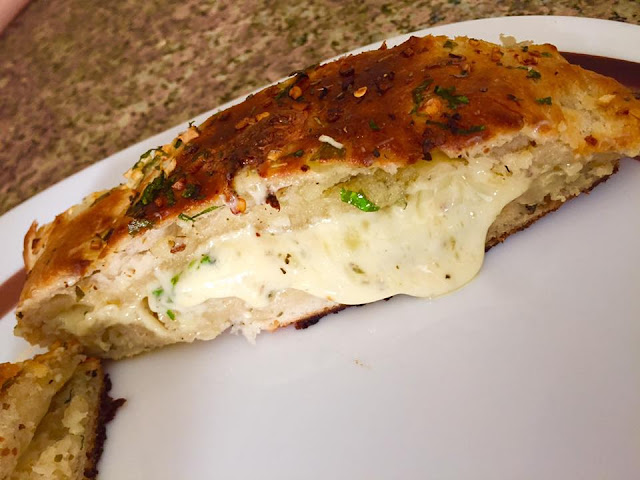 For baking the Bread
1.   Punch the dough.
2.   In a small bowl mix in butter, garlic and coriander leaves.
3.   Flatten the dough on a baking paper and spread the prepared garlic butter mix generously over the dough.
4.   Top with mozzarella cheese on half of the dough.
5.   Season with chili flakes and oregano.
6.   Fold the dough and seal the edges.
7.   Brush generous amount of prepared garlic butter on top of the fold.
8.   Top with chili flakes and mixed herbs.
9.   Make slit marks over bread without cutting them fully. Bake in preheated oven at 180 degree celsius f
Posted by Sharmila Fernandes No comments: 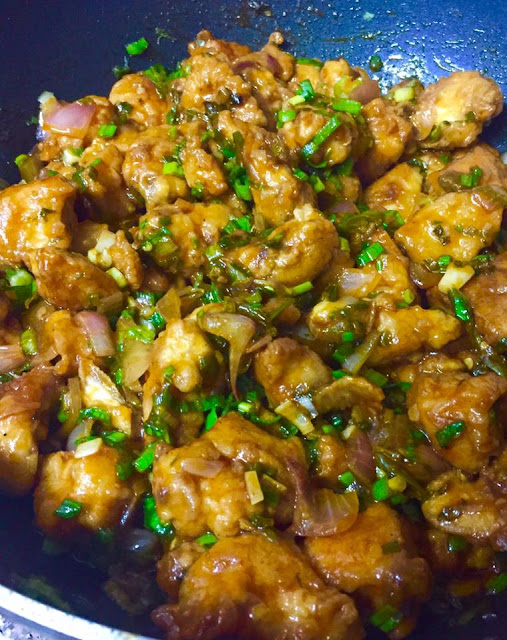 Method:
Mix Maida, little corn flour, pepper powder, soya sauce, salt and egg in a bowl.
Add the chicken pieces to this marinade.
Heat oil for deep frying and fry the chicken pieces till golden brown. Drain and set aside.
Heat a pan with 1tbsp of oil, add garlic and saute for a minute. Add green chillies and onions and stir well.
Add the soya sauce, red chilli sauce and tomato sauce. Mix well.
In this add a little chicken stock and bring the mixture to a boil.
Mix the remaining corn flour with the stock and keep it aside.
Add the fried chicken pieces and saute well. In this add the corn flour mixture and salt and mix well.
Add vinegar and stir. Chilli chicken is ready to serve.


If more gravy is required we can add little more stock and let it boil. 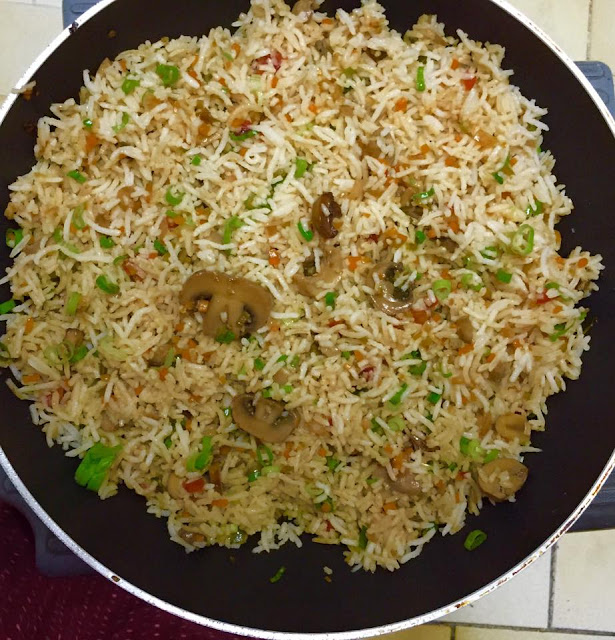 Heat oil in a pan and add the onions. Cook until they turn translucent. Then add the ginger and garlic and saute for a minute until fragrant.  Turn heat to high and add the soya sauce.  Cook for a minute and then add the mushrooms, carrots and capsicum. Continue to stir-fry on high heat until the mushrooms are fried and the veggies are almost cooked (not fully as the veggies should be crunchy). Add cooked rice along with the chopped spring onions and pepper powder. Mix well.

a daughter, sister,wife, mother, homemaker... just love what I am doing

"No occupation in this world is more trying to the soul and body than the care of young children. God gave the work to mothers and furnished them for it and they cannot shirk it and be guiltless"